One year ago this week, we launched Diablo III in over 10 languages and 30 countries around the world. Since then, weâ€™ve made significant improvements to the game, shipping upwards of 15 patches and implementing numerous hotfixes to make your battle against the forces of the Burning Hells that much more epic. 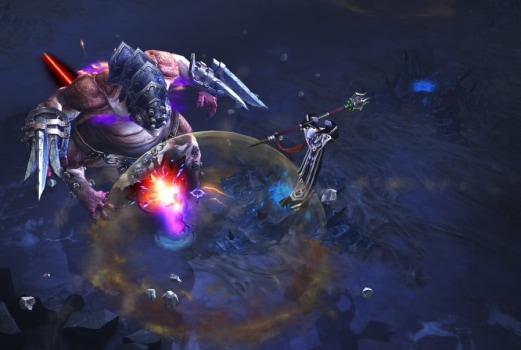 In celebration of Diablo IIIâ€™s anniversary, we wanted to take a look at the road so far â€” recapping some of the major changes made to the game since release and providing players quick access to all the latest updates.

When a hero reaches level 60, experience earned from quests, monsters, and massacre bonuses will begin to count toward Paragon levels. There are 100 Paragon levels in total, and each level will reward players with a permanent bonus to Gold Find and Magic Find, as well as core stat increases (Strength, Dexterity, Intelligence, and Vitality). For every 10 Paragon levels, players will also earn a new hero portrait border which will display in the in-game party frame. This border will not only become more impressive as you level up, it will also display your Paragon level in any place where your normal hero level is shown.

The Infernal Machine is a device that will allow level 60 players to battle â€œuberâ€ versions of some of Sanctuaryâ€™s most nefarious bosses. While the rewards for defeating these bosses will be great, some assembly is required. Only the most powerful Nephalem can unlock the secrets to building the Infernal Machine,Â  but once forged the device can be used to open portals to special encounters featuring not one, but two bosses which have been augmented from their original versions, both in terms of difficulty and appearance. Defeating each boss pair will provide players with extra items and gold, as well as a chance to find components for a new Legendary: the Hellfire Ring!

In patch 1.0.4, we made significant changes to Legendary items to make them more powerful, more memorable, and ultimately more fun to use. Through the addition of spell procs, many Legendary items now have a chance to activate rare and unique abilities, such as summoning an angel to fight with you, conjuring an icy projectile, or igniting the very ground you walk on. Legendary items are also far and away more powerful, possessing higher damage and affix values than their predecessors. In addition, many Legendary items have had visual effects added to their original models, giving them a distinct and detailed flair.